For some reason throughout my collecting of film cameras, I have been constantly intrigued by ridiculously lo-fi plastic cameras.  These cameras range in form from the freebies that were given with magazine subscriptions and bank accounts to the purpose made Holga and Diana plastic beauties.  The nice thing about the supremely crappy ones is that one can pick them up for a dollar or two at local thrift stores.  I will run through my favorites of these plastic gems in somewhat chronological order as I obtained them.

Time Magazine camera as I received it

The Time Magazine 35mm film camera.  I picked this one up in the local Animal Aid thrift store.  I believe it was 2 or 3 dollars.  It was a cruddy and dirty mess, but I had seen some nice results so figured it would be worth cleaning up.  ­­Heck, it even had a hot shoe!  It features the 50mm Kinetic Optical lens…sounds great, huh?  Settings include the “Diana-ish” sunny, partly sunny, partly cloudy, and cloudy for aperture and one guy, multiple guys, or landscape for focus.  I have enjoyed using this camera and have had fun with a flash on it.

I believe the second camera of this genre I picked up was the Ansco Pix Panorama.  I had a very similar camera in the early 90s and really liked it, but I think I broke the rewind lever on it…go figure on an all plastic camera 😉  This one is panorama except you can remove the “mask” that goes over the film frame, which I did.  I used it for a while this way and just guessed through the viewfinder until I hacked it up to resemble the full 35mm frame view.  This is an uber basic camera with only a lens cover, shutter button, film winder, and film rewind.  I truly love the simplicity in shooting this offers…no doo-dads to fiddle with…just pure composition to think about.  I now have two of these, one with the mask removed and one intact…although I have yet to really use the intact one for panorama style images…think I prefer to just shoot “wide angle.”  And on that topic…I did try a Vivitar Ultra Wide & Slim and actually preferred this model…it’s not quite as wide, but also does not feel as though I am going to crush it in the pressure of my hands  😉

The third camera I will mention is my latest addition, the “no name” blue and black “Sports” model 35-55 zoom 35mm camera!  Just got this for $2 at a new Goodwill store I just found.  Haven’t run film in it yet, but will soon.   Its controls include a manual zoom ring on the lens that even zooms in the viewfinder…how high tech!

If you are dabbling in film at all, I highly recommend this type of camera.  It’s great when you are feeling overwhelmed with f-stops and shutter speeds and all of the other decisions to make when shooting.  It brings photography to its purest form of light/shadow and composition.  And as I like to say, it’s not the camera that takes the photo, it’s the artist behind it!

Just an FYI about some events coming up where I will be showing my work.

Come on by, see my work in person and say “Hi!”  All the work I sell at events is hand signed by me on the spot and I can even personalize gifts with the name of whomever you are giving it to 😉 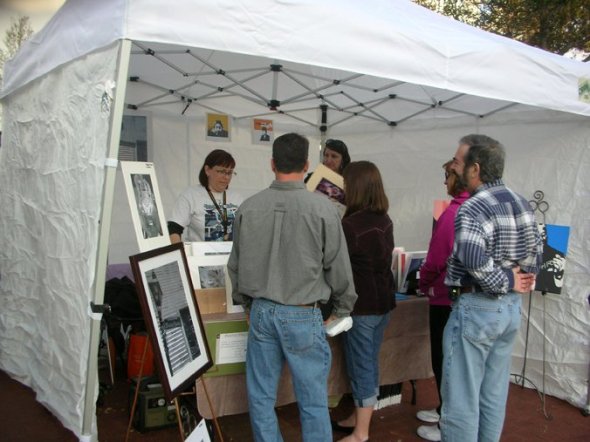 Still recovering from a long and fun weekend of food, fun, and great music at the Riverwalk Blues and Music Festival in Fort Lauderdale this past weekend.  Our friend Vena Paylo (wonderful music portrait artist) asked me to share a booth with her to sell our wares and I thought it would be great fun and we might just make some money at the same time!

I had matted up many of my images that I thought would sell to a blues and other types of musical interests crowd.  I selected some of my New Orleans ones that I had just added to the website, along with many musical instrument “portraits” I have taken over the years.  I had two images relating to Joel DaSilva of the Hep Cat Boo Daddies (great hard rocking rockabilly style music) pedal board with voodoo doll and set list and one of his well-loved Fender Stratocaster guitar with a retro pinup style woman on it.  I also had another favorite local musician represented; Graham Wood Drout of Iko Iko’s (great “swampadelic” style) white Fender Stratocaster along with his amp that has his design of the Iko Iko logo snake.  I also had a handful of images of resonator guitars which are one of my favorites…they are just art in themselves!  I also love the way they sound 😉  Lastly, I thought some of my images from Clarksdale, Mississippi last year when we went to the Blues Music Awards in May would be appropriate.  I had one from Morgan Freeman’s club “Ground Zero” and a shot of “Red’s” famous juke joint.

A Row of Resonators

It was a great festival and I sold WAY more work than I ever thought I would…including every music-related piece I brought.  I don’t think I missed any sales by not having selection though, which is good considering I wasn’t as prepared as I would have liked to have been.  Now I know more what to expect and think I’d love to do more blues related music festivals…they’re fun, the music is wonderful, and the crowd is generous and courteous…oh, and they have great taste in photography, of course 😉

I was just going through my gallery on my website and realized how many images I have from cemeteries.  I don’t know what exactly draws me to them…a sense of history, a mystery of a life I never knew, or simply showing respect to those that have left this world.  I have been intrigued since I was very young and my brothers and I would sneak into graveyards to peek at the headstones.

"The Gaze of an Angel" shot with Pentax MX

Since my foray back into film photography, I have shot Key West Cemetery and Evergreen Cemetery in Fort Lauderdale fairly extensively.  I think my favorite subjects would have to be the angels…beautiful heavenly beings watching over the souls that have passed on.  Key West has some gorgeous hand carved marble angels that I adore.  There’s even one there that had an eerie light flare no matter what camera or angle I took it from.

My favorite cameras for shooting in these environs have been my modern Diana F+ and vintage Diana, Ansco Pix plastic 35mm, and Minolta Minoltina AL-s 1960s rangefinder.

The Lomography Diana F+ was the one that led me back down this filmy path I am on.  She was sitting on a shelf at the Urban Outfitters store where I saw her and fell immediately in love!  She was a remake of a camera I had when I was a wee lass of only six years old.  Dad had brought cameras back for all seven of us kids from overseas where he was stationed with the Air Force.  I guess these little plastic Dianas fit the bill quite well since they were cheap for a military budget for their seven offspring and lightweight to carry back with him.  Now there is this bright and shiny new model luring me back to the dreamy images of my youth!

I didn’t have the funds at the time to pick up this lovely lady, but the hubby knew how much I wanted her.  He found a store locally (oddly, we didn’t have an Urban Outfitters nearby) that sold the camera.  It was a clandestine trip for me to Bear & Bird Gallery at Tate’s Comics (http://www.tatescomics.com/bearandbird/) as I would later enter a Diana image in an exhibition there and continue to be a loyal customer.

One of the first outings with the Diana was Five Points in Jacksonville, Florida where I got this shot:

I loved the look of the heavy black vignetting and softness at the edges.  That, combined with the sharp center on the image gave it a dreamlike, ethereal quality.

After using this modern Diana camera, I thought more and more of the one I had as a child and wondered how it would compare.  I priced them out on internet auction sites, but they were a bit out of my range and with plastic cameras of that age, it was hard to tell what one would get.  So after figuring that wouldn’t happen, a friend of mine said he had one in the original box around somewhere and I could have it for a great price.  I jumped at the opportunity!

But she performed as I had remembered…although the mask on the film makes the image smaller than the new one.  I find that since the image was smaller, it allowed for less of the edge qualities of vignetting and softness.   I loved the images from her anyway…

I’ve acquired many other cameras since getting these two little ladies, but they both still hold special spots in my heart.  Just reminds me I need to get them out again soon 😉